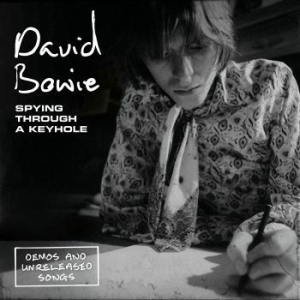 David Bowie - Spying Through A Keyhole

Spying Through A Key Whole (Demos and Unreleased Songs)
Single 1
Side 1
Mother Grey (demo)
This mid-tempo tale of a fledgling son fleeing the nest features multi-tracked vocals, guitars and harmonica from David.
Side 2
In The Heat Of The Morning (demo)
A well-known early Bowie song but presented here in demo form with final lyrics.

Single 2
Side 1
Goodbye 3d (Threepenny) Joe (demo)
A charming demo from 1968 not to be confused with Threepenny Pierrot, a song performed by Bowie captured for posterity in the Scottish TV production of Pierrot In Turquoise early in 1970.
Side 2
Love All Around (demo)
A delightful love song from whence the title of this collection came: "I see a pop tune spying through a keyhole from the other room".

Single 3
Side 1
London Bye, Ta-Ta (demo)
An early demo version of the song with completely different lyrics in a couple of the verses compared to those of the later full band versions.
Side 2
Angel Angel Grubby Face (demo version 1)
The first and only previously known demo of this song.